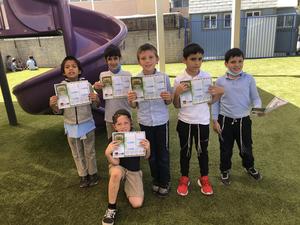 At the Semel house, TDSP bookkeeper and Financial Aid supervisor Mrs. Baila Semel is handed a glass of water by her son Chaim, in 3rd Grade.

“Can you make a Shehakol on this so I can say Amein?” he asks her. After Mrs. Semel makes the bracha, Chaim dutifully notes it on his contest page.

This scenario is being played out in dozens of TDSP homes. Children are saying their brachos out loud and answering amein loudly and clearly whenever they get the chance.

This is part of the nationwide Out Loud Brachos Contest. It is a contest that 50 schools, and about 25,000 children participate in every year.

The premise of the contest is simple enough for everyone to participate and be a winner. Children who make five brachos a day with someone answering amein, can earn prizes at local restaurants, like chicken nuggets from Kitchen 18. Children who say amein to a parent’s bracha or say the asher Yatzar bracha after using the bathroom can be entered into a raffle for a cash prize.

“The first word of the Torah tells you that it is very important to bless Hashem out loud,” said Mr. Nochum Feiner, one of the founders of Out Loud Brachos. “Bereishis stands for ‘B’Kol ram avarech shem yisborach tamid’- in a loud voice I will bless the name of Hashem always. Hashem appreciates you saying brachos out loud. When you say something out loud it adds more chashivos (importance).”

Mr. Feiner, who lives in the Five Towns in New York, said that the purpose of the contest is “for kids to get accustomed to saying brachos out loud to make it a regular part of their life.”  The other founder of Out Loud Brachos, Mr. Zusia Ari Monk, also from New York, visited Phoenix in February. As part of his visit, he spoke to the middle school girls about the importance of Hakaras Hatov, and thanking Hashem, the source of all brachos.  “This program talks to anyone from any background,” said Mr. Feiner. “Everyone makes brachos!”

At TDSP, many children are embracing this brachos contest wholeheartedly.  “My brother and I are very happy that (this contest) came out. This is our first time doing it and it’s so much fun!” said Mordechai Rosenberg, from 2nd grade. “It helps you and reminds you to do brachos,” said 4th grade student Eliyahu Yankelewitz.  Kindergarten student Brocha Ungar had a different perspective. “I can’t wait to get free food!” she said.

Torah Day School of Phoenix thanks Out Loud Brachos, and local sponsors La Bella Pizzeria and Restaurant, Imperial Kosher Market, Misha’s European Food Market, and Kitchen 18, for their generous support of this contest.