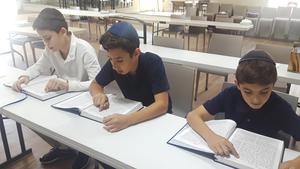 Our annual Shnayim Mikra program is in full swing!

For the fifth straight year in a row, TDSP has launched its annual Shnayim Mikra contest. “Shnayim Mikra” literally means “reading twice”. It refers to the custom of “Shnayim Mikra V’echad Targum”- the custom  of reading through the Parsha of the week twice in the chumash, and then once with the commentary of Onkelos or Rashi.

“This comes from the Gemara and it is also discussed in the Shulchan Aruch,” said Rabbi Noach Muroff, who is running the Shnayim Mikra contest. “It says there that anyone who finishes Shnayim mikra v’echad targum is guaranteed a long life.”

The TDSP program is designed with three things in mind. The first is to introduce the boys to the concept and obligation of reading the Parsha twice every week. The second is to get the boys to go to shul and be part of Krias Hatorah (Torah reading) and the rest of davening, and the third is for them to learn and gain a better understanding of the weekly parsha.

“We explain to the boys the importance of doing something with the rest of the Tzibur (congregation),” said Rabbi Muroff.  “It’s a nice thing- similar to Daf Yomi- everyone learning the same parsha on the same day together.”

Boys who complete the task each week are entitled to special lunches and a special trip at the end of the year. “The program is fun and my dad enjoys it a lot and so do I,” said 6th grader Binyamin Gavrielov. “The most challenging part is trying to read the parsha with the Trop (cantillation), when your parents say you have to read it with the trop!”

“I think the idea of going to shul feels very big when you’re a boy,” said Mrs. Dani Rovinsky, whose son Yehuda, in 5th grade, is participating in the program.  “This makes it more tachlis, more practical. They go for laining but really they are there for the whole thing.”