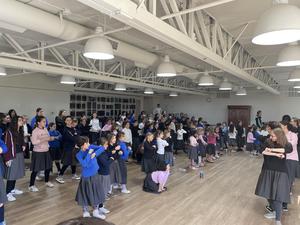 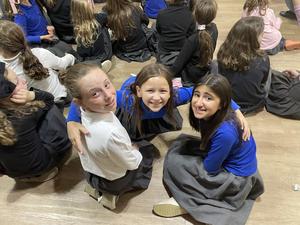 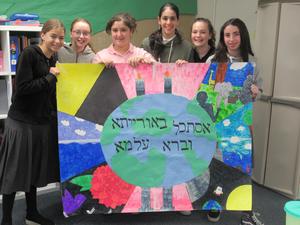 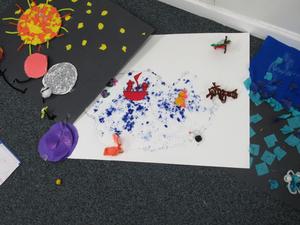 Our Girls Division had their first G.O. Assembly of the year and broke out the new theme - Istakel B’oriesa Uvarah Almah.

Last Friday, the 8th Grade Girls invited the K-7th girls to the first G.O. assembly in honor of Rosh Chodesh Kislev. The girls excitedly filed into the multi- purpose room and awaited the break-out of this year’s G.O. theme. First, the 8th graders surprised everyone with a breakout of the theme. Girls from the different grades were called up to quickly put together seven different challenging puzzles. Then according to the number puzzle given, the group that completed the puzzle presented it for everyone to see and guess the G.O. theme.

After discovering that each puzzle displayed a day of creation, the 8th Grade Girls revealed their beautifully decorated banner that pictured the seven days of creation with the passuk Istakel B’oriesa Uvarah Almah written in the center. Quickly coming into their dance formation, the 8th Graders prepared to do the awaited G.O. dance. But to everyone’s surprise, the music from 613 Torah Avenue days of creation song began playing! Then, to the audiences’ relief, the real G.O. song played. The song and dance were a smashing success!

Next came the exciting activity where each class was given a bag of materials and a day of creation to depict. While eating lunch, the girls worked together quickly to design the best illustration in the short amount of time given. The winners of the best-designed day of creation will receive a donut party! Once everyone reassembled with their posters/dioramas, each class presented their artwork, explaining how they designed their day of creation. Winners to be announced!

For the closing of the assembly, the girls received a globe keychain to represent the world created in seven days. This week, the 8th Grade Girls went around to teach the G.O. dance to different classes. Hopefully, with much practice, every girl will know the dance for next month’s G.O. assembly. G.O. is off to a great start this year!