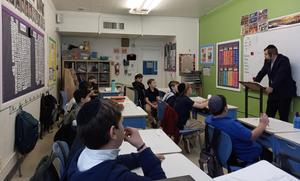 Rabbi Field joined the 5th grade boys last week and gave them a farher on Parshas Bo, which they had just completed.

When 5th grade finished their in-depth study of Parshas Bo, 5th grade Rebbe Rabbi Nosson Ungar Tuesday reviewing the entire parsha with the class. On Wednesday with the parsha still fresh in the boys’ minds, he invited Rabbi Field as a special guest to “farher” the boys. A Farher is an oral exam that is given in yeshivas to test the students on their learning.

“The Farher gives the boys a sense of pride, that they can demonstrate what they learned in the parsha- and Rabbi Field gets an opportunity to see what the boys have accomplished and to share a message from the Parsha from another perspective,” said Rabbi Ungar.

The message Rabbi Field chose to share with the boys was on the words that Moshe said to Pharaoh when Pharaoh asked which of the Jews wanted to leave Mitzrayim to serve Hashem- “B’nareinu UBizkeineinu Nelech,” Moshe answered, “With our children and our elders we will go.” Rabbi Field explained that Pharaoh thought it was only the men who needed to go serve Hashem, but Moshe said ‘No- in our religion we take the children along with us.’

In Judaism, religious practice is not limited to adults. In fact, it’s the opposite. It’s a religion for everyone and children need to learn and daven too. The day after the Farher, the boys celebrated their accomplishment with a pizza lunch.