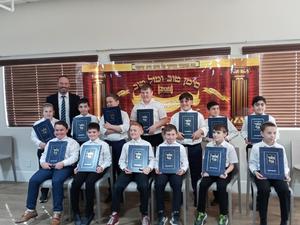 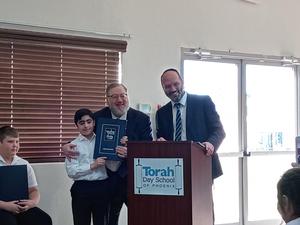 The fifth-grade boys reached an important milestone of receiving their first Gemara!

The fifth-grade boys celebrated the momentous milestone of receiving their first Gemara with a beautiful Haschalas Gemara presentation. After hours and hours of rehearsing the performance, all the parents, grandparents, siblings, and relatives gathered in the multipurpose room Thursday morning to watch the boys receive their very first Gemara.

“Why are we making such a big deal? We get a lot of stuff!” the boys ask Rabbi Ungar every year. “We make a big deal out of it because it is a big deal!” Rabbi Ungar answered in the introduction of the presentation. “Getting a Gemara is really the turning point of our lives. This significant event opens doors to never-ending future growth and understanding in Torah, Mitzvos, and Yiddishkeit.

Dressed in white shirts and big smiles, the boys sang their first song, in which they recited all of the Gemaros and their topics. “Our Tefillah is that as well as they know the names of the Mesechtas (topic in every Gemara), they should know the content of what is in the Mesechtas as well,” Rabbi Ungar prefaced the song.

Rabbi Field then spoke about how the boys were linking to our nation’s mesorah from Har Sinai by receiving and learning Gemara. After, the respected Mechanech Rabbi Mechanic from Brooklyn spoke to the boys about the importance of the event they “should never forget.” Rabbi Mechanic expounded that the key to learning Torah and keeping the Mitzvos properly is with Torah Sheba’al Peh (Oral Torah), and the Gemara plays a key role in observing Yiddishkeit.

At last, each fifth-grade boy was presented his own Gemara from Rabbi Ungar and Rabbi Mechanic. Once every boy received his Gemara, one of our esteemed fifth grade students read and translated a paragraph from the Gemara with impressive clarity. The students sang one last song “Yehi Ratzon Milifnei Avinu Shebashamayim” which is a prayer that Hashem should in- still love and fear in Jewish children and they will become people who are involved in Torah and Mitzvos.

Lastly, all the teachers, fathers, and boys danced with the fifth-grade boys and enjoyed refreshments, including a delicious Mazal Tov cake to celebrate this important accomplishment. A big thank you to Rabbi Ungar and Rabbi Field for such an amazing and meaningful Haschalas Gemara presentation. May the fifth-grade boys continue to relive the excitement of receiving their first Gemara for the rest of their lives.