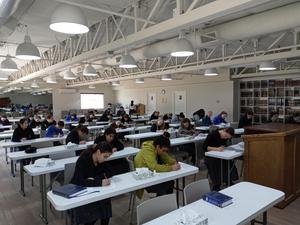 After a Hebrew leap year, Rabbi Ungar organizes a special 9-week Hebrew Spelling Bee program. This year, beginning after winter break, the girls in grades 5-7th were given a sheet of the Hebrew spelling of 12 words. Words included the spelling of the names of the Shevatim, the months of the year, and other foundational Jewish words.

At last, on Thursday, March 31st, the students took the final grand test of the 100 Hebrew words. All the girls gathered in the multipurpose room and filled out those tests with all the information they had worked hard for more than 9 weeks to know.

“The point is for the girls to at least now that there is a specific Hebrew spelling of words,” says Rabbi Ungar, “that the word is written in the Torah a certain way.” Keep a lookout for the exciting prize for the winners of the spelling bee!