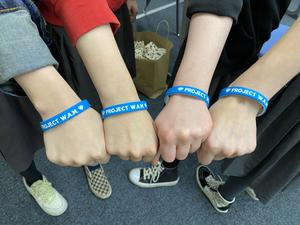 This week, the 8th-grade girls completed their first-ever 6-week WAM program in Morah Wealcatch’s class. Every classmate participated, investing much energy in a collaborative effort of self-discipline and self-reflection to create a positive Torah learning atmosphere.

Initiated to improve Torah learning, Morah Wealcatch asked the students for possible strategies to improve and refine the overall class environment. After gathering student feedback, Morah Wealcatch designed the Words Appearance Media (WAM) program. Every participant signed a “contract” that outlined the requirements and expectations of the program.

Beginning after lunch daily, everyone had three different areas to ensure they were pristine for the afternoon Kodesh class. Recognizing that each person has different sensitivities, the girls worked to watch that their speech was refined and appropriate, refraining from using harsh words. Maintaining a clean learning environment, each girl made sure that the classroom was always neat. Lastly, in showing respect to the Kodesh subjects, talking about non-school-related secular books and media was not allowed.

Morah Wealcatch distributed personalized WAM bracelets to be used as a reminder and a sign of participating in the program. Also, spontaneous mini prizes were awarded to those wearing their bracelet. Icees, potato kugel, and iced coffees were some of the girls’ delicious prizes. At the end of each day, every girl logged how well they felt they participated in WAM. At the end of the week, there was a questionnaire that reflected on the overall week’s performance. Girls would reflect on different challenges they had in participating in WAM and examine different areas for improvement. Also, each person acknowledged a special victory moment they had during WAM that week.

This six-week program really affected the overall conduct of every girl. Both inside and outside the classroom, students watched their actions. Girls would look out for each other, reminding themselves and others by saying “WAM” any time something did not seem right. For example, if something was dropped on the floor, girls would call out “WAM” as a re minder that it needed to be picked up. “WAM helped me,” Ruthy Babakhanov explained, “watch what I say and talk about - things talked about in certain places and not talked about in other places were kept separate.”

Additionally, students expressed how they had an increased awareness of their actions even out of school. Avigail Putney presented a scenario where even with her siblings she realized in her head “I am wearing my WAM bracelet, I shouldn’t say this.” Overall, the program had many positive growthful experiences. “Aside from the fact that [WAM] helped make everyone more receptive to learning,” Morah Wealcatch expounded, “it made everyone more sensitive to each other.” After much work and investment in WAM over the past six weeks, the eighth-grade girls are looking forward to their grand reward!