Giving Boys a Taste of Shabbos 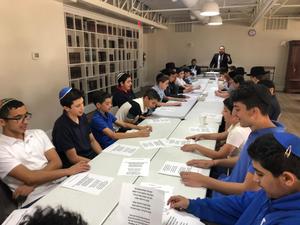 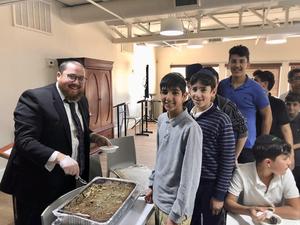 Our two new Erev Shabbos programs for boys, Toameha and Masmidei HaShabbos, are underway and a big hit!

This past month two new programs launched at TDSP, designed to enhance our students’ appreciation of Shabbos. The first program is for Middle School boys, during the final half hour before dismissal on Friday afternoon. It is called Toameha, the name coming from the Tikanta Shabbos part of the Musaf davening. In that tefilla it says “Toameha Chaim Zochu”- those that savor Shabbos will merit life. The program was designed to help boys savor Shabbos.

“At the end of a long week, we wanted to give the boys some- thing extra to change the pace a little bit and give them a nice feeling going into Shabbos,” said Rabbi Muroff, Assistant Principal of the Boys’ Division. At the inaugural Toameha last week, Rabbi Mandel taught the boys the song “Heilige Shabbos” and Rabbi Zachter told a story about a family’s dedication to Shabbos. The boys feasted on Kugel from Ezras Cholim, made by TDSP parent Mrs. Svetlana Tsitsiashvili.

The program will follow a similar format every week, with different people telling stories and Divrei Torah. “The main goal of the programs will be that the boys leave their week in school happy and excited to go into Shabbos,” said Rabbi Muroff.

The other program that is being launched in grades 4 through 8 in the boys’ division is Masmidei HaShabbos. Masmidei Hashabbos comes from Ki Heim Chayeinu – the organization that a few years ago had a program called Masmidei Hasiyum, designed to get children excited about the Siyum HaShas (completion of the daily study of Gemara). It is an organization that reaches schools worldwide, and hundreds of schools are enrolled in the program.

Masmidei Hashabbos wants to get children to feel the amazing power of Shabbos. Every two weeks they distribute a magazine that has stories, Divrei Torah, questions and answers, quizzes, and things to learn about Shabbos. The program also gives the boys four missions to complete every Shabbos. They need to learn from the book, sing a Zemer (Shabbos song) at the table or daven with extra kavana, discuss the book at the Shabbos table, and answer the weekly bonus questions. When they have completed the missions, they can call into a hotline number and be entered into raffles to win individual and class prizes.

“The idea behind it is to get people excited about Shabbos, increase people’s knowledge about Shabbos, and get more people involved at the Shabbos table,” said Rabbi Muroff. “It’s really quite nice!”